We will finally be adding the first long-awaited missing elements of community to the game, via the release of “Country Invasion”. It should help boost activity within countries and get players to work more together towards a common goal by defeating daily invasions with their countrymen to claim the war spoils. 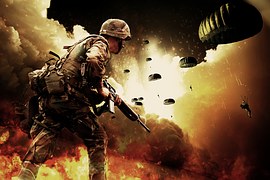 By contributing to country invasions, players will gain additional rewards for their
account and help their countrymen progress faster throughout the game, as by completing an invasion, all players within the same country will be able to claim additional rewards. But the more you contribute, the bigger your spoils will be! To progress through the invasions smoothly and to get bigger and bigger rewards, this will need to be a country effort. Although strong soldiers might initially be able to progress well by themselves, it will soon become a struggle to progress fast on their own, without help of their countrymen, so will need to look for additional help and expand their country’s ranks to be able to keep invading effectively.
Note that this feature will introduce a different type of damage to the game, which will be based off your rank and some of your Damage Per Clicks (DPC), so this will really be a group level, and not one that can be dominated by a single player.

Sometimes it’s hard to communicate with other players, so our generals have dispatched a convoy of communication equipment that will arrive to the battlefield just in time for country invasion, and enable you to communicate with your countrymen and help them through the game by discussing different strategies, giving tips… All of this also means that there will be need of establishing some hierarchy within the countries, with country leadership representing their countrymen.

At the beginning, the country leader will be the strongest soldier with the most score, so if you think you would be a good leader we suggest to start raking up that score of yours and getting ahead in your country to take the claim.
Soon there will also be the need of taking decisions for the countries by the leadership, something that will already be hinted via the release of Country Invasions for one of the future updates.

To help everyone expand their country’s ranks more easily, we will also introduce a streamlined option for you to help recruit new friends via your referral link to help you fight for your country! More tips on helping you recruit better in an upcoming post.