Feel free to check out our newest update/new game element, Country Invasion is finally here! It adds a new community element to the game, adding a second form of competition between countries. 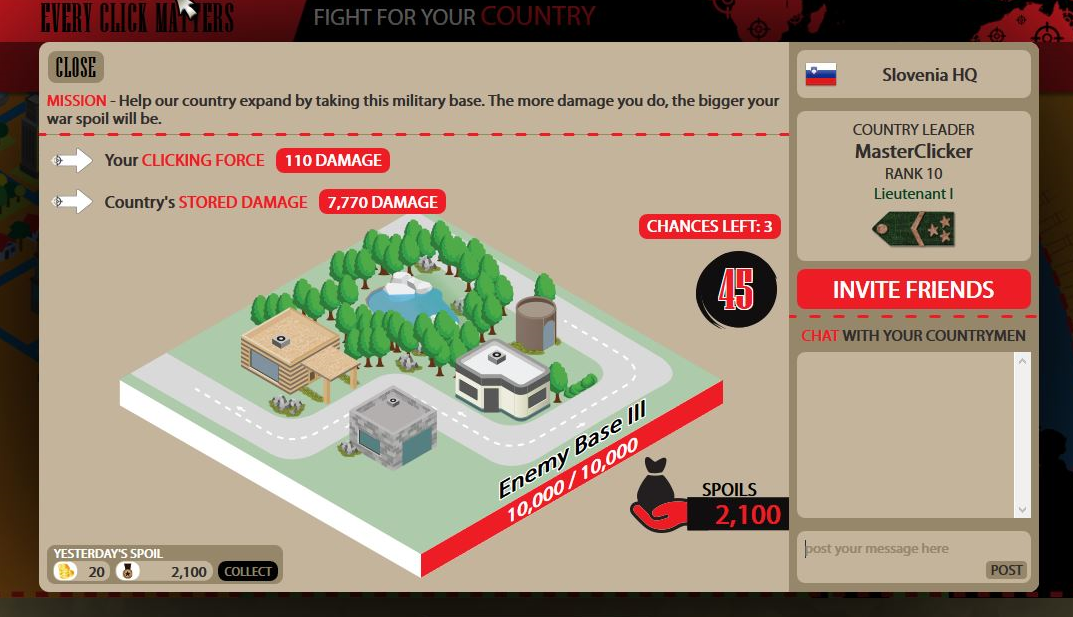 When starting the Country invasion, players will face at first face some easy battles, which also one soldier can defeat in a single day. But soon the battles will become tougher and it will be impossible for a single soldier to complete an invasion on his own, or at the very least it will take you a while. To progress through the country invasions effectively and complete them every single day, it will require cooperation from more players from a country to be able to complete them. Don’t hesitate too long with expanding your country’s ranks to help you complete the invasions regularly, as you will be missing out on a lot of potential rewards you can get by making sure your country completes the invasion battles consistently!

This new mini-game has also one new secret function: Stored damage. We can’t just yet reveal its secret, but to give you a hint – it’s worth storing as it will serve a future purpose in a country’s arsenal & decisions.
Players can get lots of benefits by actively participating in Country invasions, as the more you participate bigger your spoils will be. But even if you don’t manage to help out your country on a specific invasion, all of the countrymen can still get a minimum spoil of 20 Gold each time their country finishes an invasion battle.

Also of a worthy note – players can now chat with all of their countrymates inside the country invasion screen and also invite friends to the fight by using prepared materials. The stronger you can make your country’s ranks the bigger the competition will become between countries, so every new recruit you can help get will only add to WarClicks’ being more competitive and giving us more options to expand on!

See you in the game,
Team WarClicks.com