As we have recently released two HUGE features (Events and CvC(+Alliance Fights)) we now want to focus on some issues and updates we had to put on the side during the development of those.

First some major bugfixes & improvements will be sorted, then we will also do some major balancing updates (more on that below) that will make the game pace more exciting, especially in late game.

GENERAL BUGS/IMPROVEMENTS
While we will be chipping through most of the full bug/improvements/ideas lists, we will be prioritizing these bugfixes/improvements in the following weeks to get as many sorted as possible:

FEATURE IMPROVEMENTS
We also want to look into the following:

-prevented a super rare bug that could result in resetting support units
– Autoclicker texts improved once showing use Autoclicker instead of cooldown
– Support Power animations not popping up through Free Gold popup, Re-Supply Truck popup, Daily Mission popup anymore
-Time challenge weird sounds resolved
-if not finishing the boss, switching to Boot Camp and going back allows you to attack it now
– can’t close the mission tab after finishing it – RESOLVED
– prevent deploying with 0 contractors in JS issue should be sorted
– AutoClicker animations and sounds now stop when running out of fuel
– AutoClicker stops after opening certain popups (daily mission, army setup)
– Competition popup – stats on details updated added

Hopefully, tomorrow we are releasing HOTKEYS, they are almost done, but will need a few additional checks so that all goes well once deployed. Moreover, we will also be releasing upgrade tiers in Army Setup for HQ DPC upgrades, that will enable us to ensure all sort of upgrades are worth it even in later stages!

A completely new section that will add additional value to your accounts. Currently, we have five different Unlocks, four of them can be unlocked simply by progression in WarZone (Levels/Ranks) and the last one can unlocked via Gold – because it’s a kind of unlimited product, that allows the AutoClicker unlock to run on it’s own indefinitely without a cooldown period.

By unlocking AutoClicker to your arsenal, it will help you destroy units in WarZone with less effort and ensure your mouse stays intact and you don’t get a carpal tunnel syndrome!

Thanks to a lot of player feedback and further analysis, we’ve decided to add a new feature to the game,  that will take the strain away from constant need for clicking during attacking, making the game far more enjoyable to play, both for old and new players. 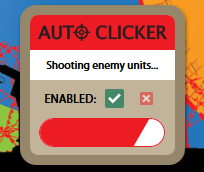 AutoClicker is a feature that will surely make all the clicking a lot less tedious – with it you can if you wish, progress through the game while doing other things, but at the cost of missing those fuel and gold drops J. If you prefer mindless clicking, you can always disable Autoclicker to buy upgrades at the perfect time and maximize your game progress!